Transmission System Operators (TSOs) need nowadays to utilize more efficiently their existing infrastructure. Especially the electrical network. The increasing amount of wind parks has clear advantages, producing clean energy, but also means a stronger instability in power generation (represented by sudden peaks, related to changes in wind speed and direction). These peaks surpass today the fixed conservative limit to the maximum current capacity of overhead lines (OL), the so-called ampacity. Solution to this is either to construct new OL or to increment the fixed conservative ampacity limit. The former can be easily achieved using sensors.

The ampacity of an OL is strongly related to the conductor temperature, which at the same time relates to the weather conditions in its surroundings. Using weather sensors TSOs can know what is the network ampacity in real-time. If moreover a weather forecasting, locally in the surrounding of the conductor is known, an ampacity forecasting is also achieved, which is helpful for the TSOs to plan ahead power transmission and generation. 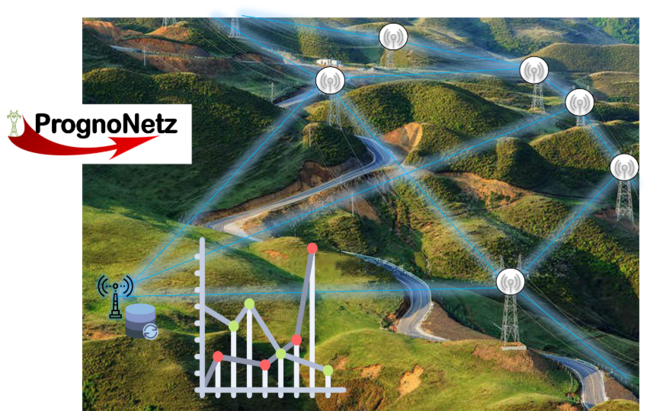 The main goal of the Project PrognoNetz is the development of a self-learning meteorological network for weather-dependent overhead line operation. Based on distributed measurement data collected along the electrical network, intelligent algorithms will model and predict the cooling effect of the weather on the conductor. This is, not only, a very important prerequisite for the expansion of renewable energy sources, but also will allow saving money in systems operations. Through a forecast of the maximum carrying capacity, TSOs are able to plan the optimum power transmission, instead of conducting short-notice expensive re-dispatching.

The Project consists on a very talented team of meteorologists, engineers and computer scientists from different companies and research institutions. Together and in association with our TSO-Partner Transnet BW, we are working on the electrical network of the future.